Skip to content
Chris Monthly recap: What have I been watching?, Uncategorized December 7, 2017January 6, 2018 5 Minutes 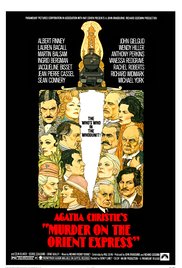 Murder on the Orient Express (1974) (Sidney Lumet)
The movie has a great ensemble cast. Albert Finney is almost unrecognizable, disappearing into the role of Belgian detective Hercule Poirot, his oscar-nominated acting was more impressive than Ingrid Bergman’s. She won an Academy Award for a forgettable performance here.
Agatha Christie keeps you guessing with lots of suspects and clues in an intriguing whodunit mystery. The big reveal was a surprise and one of the great twist endings. Although once the mystery is solved I have to admit the film loses its fascination, and I haven’t thought about it since.
7/10

The Killing of a Sacred Deer (2017) (Yorgos Lanthimos)
Has the same flat acting style of Lanthimos’ other work (The Lobster, Dogtooth), so it isn’t for everyone. For me, the best film of 2017 so far. I’ve heard it described as a “feel-bad movie”. Elusive, illogical, dream-like, uncomfortable psychological horror-comic mystery. The past can come back to haunt you. Guilt or injustice can bring about nightmares, and the entire film might be a bad dream of one of the main characters. Supposing it is for second, it’s interesting to speculate if nightmares reduce or increase psychological tension. The religious interpretation is also valid. In Greek tragedy, defiance of the gods (hubris), leads to nemesis. As with Dogtooth (2009), the story works on different levels, another reading is that it’s a simple drama with some coincidences and misunderstandings. A fourth angle could be if Martin somehow did something plausible that caused the incident, but for the life of me I can’t figure out what that would be. There’s no evidence that the hospital were at fault, and in these type of situations doctors (for centuries) have been easy targets for blame. That said, I think it’s a film that would force any doctor to assess his/her professionalism.
It’s a difficult film and won’t have the broad appeal of this year’s horror success Get Out. If you are open to something vague and thought-provoking, give it a shot.
9/10 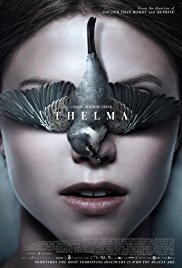 Thelma (2017) (Joachim Trier)
I’m a fan of Joachim Trier’s work, possibly his best known film is Oslo, 31. august (2011). His latest is an intriguing, unsettling, well-told coming of age horror mystery. I empathized with Thelma’s self-discovery and dark secrets, though not someone I’d want to meet! She is a young woman afraid of losing control of her body, her desires, and her identity.  She is searching for her place in the world and testing the boundaries of her Christian background. The film questions what we are in control of and what we are not, and queries the price of liberation. Thelma, like other Joachim Trier characters, is lonely, and despite a family who love her, she doesn’t know how to belong.  Not understanding in what way to reach herself or those around her. The friendship with Anja is a way forward but difficult to deal with due to its intensity.
While the acting is excellent by the lead Eili Harboe, the story maybe doesn’t have enough warmth, emotion and distinctive scenes to be considered a genre classic. The opening and ending sequences, as well as the flashbacks to her childhood, were the visual stand outs. Like The Killing of a Sacred Deer reviewed above, it’s possible many scenes are happening internally.
On a side note, one of Trier’s friends introduced him to a book by Aleister Crowley, which detailed the right to free sexuality and existence outside a Christian lifestyle. Trier discovered that “thelema” is derived from the ancient Greek word for “will”.
7-8/10 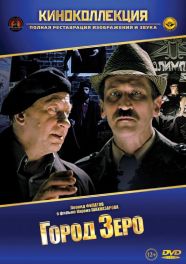 City Zero aka Zerograd aka Gorod Zero (1988) (Karen Shakhnazarov)
Recommended to me by Mr Bobinsky at indiescifi451. Included in his top 10 Soviet sci-fi films
My thoughts. The tone of the film is very specific, a sort of absurd kafkaesque deadpan comedy/mystery. Throughout the film, there’s a sense of dread. In Kafka’s world, you cannot get an answer to your questions from the authorities and absurd misunderstandings and accusations occur. The bureaucratic powers are incompetent. The mood of City Zero has a bit of that.
The restaurant scene is particularly surprising and funny. Amusing the museum is in the middle of nowhere and something decidedly odd is going on with the museum exhibits. I probably didn’t get the full impact, as the Russian history and politics went over my head, but I was still able to enjoy the film nonetheless. It’s unclear what is going on in the town. Perhaps the townspeople have created a scam. I could be wrong, my theory is the they wanted Varakin to replace the chef.
Could be viewed as an allegory for governmental control and freedom of the individual, something that was an issue behind the iron curtain in the 80s. Open to more than one interpretation. I wonder if the museum exists somewhere in Russia or was created just for the film?
An unpredictable story that I couldn’t stop watching.
8/10

Luther (2003) (Eric Till)
I keep hearing mention of Martin Luther because of the 500 year anniversary since the reformation in 1517. The film portrays him as a man of courage and vision, and he was an important reformer of his time.
Among scholars he is not as flawless as the movie suggests, with some who have studied his writing arguing Luther was an anti-semitic. Impressive, expensive looking production values transport you back to the 1500s.
7/10 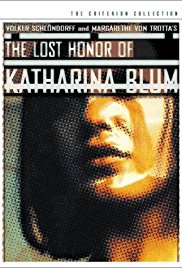 The Lost Honor of Katharina Blum (1975) (Volker Schlöndorff)
Does a good job of showing the pressure and surveillance certain Germans were under during the DDR years. A captivating, bold story to tell considering was produced in the 70s. I didn’t realize the press co-operated with the government, that aspect was especially
interesting. I will say though that Katharina probably would have been put under surveillance no matter where in the world she was, because of the situation she finds herself in. Vilification by the media is still highly topical.
7.5/10

The Best Exotic Marigold Hotel (2011) (John Madden)
You don’t need to be of “a certain age” to enjoy this movie. Alyson will get that joke. Characters I cared about, and a quite charming story about the search for meaning and happiness. For the most part, avoids cloyingness/sentimentality. Kind of a Love Actually set in India, if that makes any sense.
7/10

Score: A Film Music Documentary (2016) (Matt Schrader)
Doesn’t say anything new. A bit shallow. I finished it mainly for the movie clips, which are well-chosen for the impactful use of score.
4/10

A Life in Waves (documentary) (2017) (Brett Whitcomb)
Documentary about the life of pioneering electronic musician Suzanne Ciani. Growing up playing the piano, she attended Berkeley’s music course. Praises her mentor Don Buchla, whom she worked with and learned from. He was an inventor in the field of sound synthesizers. She would go on to form her own company, making the sound effects for movies, commercials, and a pinball game. Later releasing solo albums in the 80s. On 1982’s Seven Waves what she was trying to do was create “sensual, feminine, romantic, passionate, emotional music. Music with machines”. With her second solo album in the mid 80s, she talks about the relief of the New Age category in record stores , which meant customers would be able to find her music. From her third album the focus would shift to piano-based music.
Nature is a major inspiration for her work: “Nature gives us confidence that the world works without us. This is all orchestrated without us, We didn’t plan it. It’s just here, and it’s perfect. The other thing about nature is it’s a little more chaotic, it’s like, birds and Bach. The birds are beautiful, but it’s not composed. So for me, nature is a spiritual starting point, because it brings me peace and calmness, and that is what my music is about”
Other electronic/new age musicians mentioned: Robert Aiki Aubrey Lowe, Rob Zantay, Sarah Davachi, Kitaro, Chris Ianuzzi, and Peter Baumann(of Tangerine Dream)
6/10

24 thoughts on “Films and TV of the month: November”