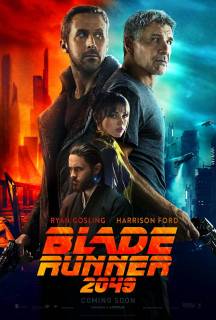 History has proven that rarely is the sequel better than the original. It was going to be an uphill battle to equal (or improve on) a film as groundbreaking and quotable as the 1982 film. Blade Runner 2049 is good but not a masterpiece. I knew was going to be fan service and that is basically what it boils down to.

Several actors have smaller roles than expected. There are a few cameos, but I won’t go into specifics. The filmmakers have said all along that you should go in knowing as little as possible, as the plot is a spoiler in itself.  There’s an expansion of this world and the slow pacing is daring for a blockbuster, yet I felt the storytelling was too concerned with honoring the original. In that sense, it’s zeitgeisty, in paying homage.

The writers waited too long, in the 35 year gap since 1982, various TV shows and films (again, without going into spoilery territory) have already run with the philosophical themes presented in Blade Runner 2049. And you could argue most of what is presented in the sequel was alluded to tacitly in the original.

Yet an admirable effort that held my interest. The plotting is quite intricate, and fun to be back in this universe. Just isn’t as emotional, chill-inducing and memorable as Ridley Scott’s classic. The first film could be considered sci-fi-noir, the second has been described as an “Arthouse-Blockbuster”. Worth watching on the big screen to meet Deckard again and for the stunning visuals, but go in with moderate expectations.

The 1982 film is among my top 10 of all-time, and the atmospheric soundtrack is a big reason why. Vangelis didn’t return as composer. At the end of the month, I’ll review the new score by Benjamin Wallfisch/Hans Zimmer.