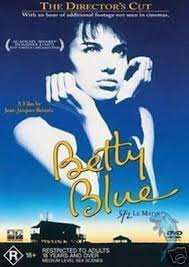 My contribution to Ryan McNeil’s 2016 blindspot series blogathon where I watch a film each month that I have never seen before.

Oscar-nominated French drama/romance. A touching and at times humorous 80s cult classic. Based on the 1985 novel by Philippe Djian. A star making turn by model Béatrice Dalle as the title character, a mentally unbalanced and sexually aggressive free spirit who becomes involved with Zorg (Jean-Hugues Anglade), a repairman and aspiring writer.

I saw the longer director’s cut which is three hours.  Has quite a bit of nudity, the film starts with a sex scene, and later we see scenes leaving little to the imagination of them naked. It’s a running theme that the main characters feel uncomfortable wearing underwear, which links to how free-spirited and sexually liberated they are.

An example of cinéma du look, which referred to a group of French films from the 80s that had a slick, gorgeous visual language with loving attention to the smallest detail. A focus on young, alienated characters who were said to represent the marginalized youth. Luc Besson, Jean-Jacques Beineix and Leos Carax were considered key directors of “le look.”. These French filmmakers were inspired by New Hollywood films (most notably Francis Ford Coppola’s One from the Heart and Rumble Fish), late Fassbinder films (Lola), television commercials, music videos, and fashion photography.

The story feels light-hearted, but if you look a little deeper it’s about how relationships and friendships affect your life. Betty is described as a wild horse, who cannot bear immobility and wasn’t made for that.

It’s a brave choice to let Betty do unlikeable things, even if those she has hostility towards are not exactly likeable themselves, such as the man who asks them to paint the holiday homes, the grumbling woman at the restaurant, and the book reviewer who trashes Zorg’s book.

I’ve read criticism that Zorg in real life would not have put up with Betty’s antics, and that the film is only about skin, but I didn’t have those problems, and I believed in their intense feelings and that they were head over heels in love.

The film worked best during the opening 90 minutes. After the funeral scene, I felt the story lacked urgency, although the scene with the piano on the truck was fun. The last act is certainly memorable, and explains what came before.

Despite these quibbles, a beautiful and sensual film which you can lose yourself in. Strong performances by the two lead actors, and a haunting score by Gabriel Yared.