A Nightmare on Elm Street 3: Dream Warriors (1987) (Chuck Russell)
Arguably the best sequel of the franchise and a fan favorite. Imaginative in how it incorporates dream sequences in patients at a mental institution, with original cast member Heather Langenkamp returning as Nancy, who is older and a newly hired member of the hospital staff. The characters have personalities so you care about their fate. Interestingly, at about an hour into the movie, the nun talks about Freddy’s past. There are formulaic elements in how the story is told, but the story is entertaining and the characters in-dream abilities are empowering. Many memorable moments, including the end credits song by Dokken.
I liked the special effects, which are quite surprising and inventive. SPOILERS: The tap handle which changes shape, the melting bicycle with blood on its tires, the roasted pig head which comes back to life, the hall of mirrors, the car dump, etc. Another memorable aspect are the various incarnations of Freddy Krueger as a giant worm, puppeteer, talk-show host, and using drugs as a weapon. I wish they had done more with the paper mache house, but that’s a minor quibble.  I admire the filmmakers had the bravery to show children die which might not be the case in every horror movie.
Favorite quote: “You never lose a gift like that. You just forget how to use it”
Rating 8/10

What Ever Happened to Baby Jane? (1962) (Robert Aldrich)
Not exactly a horror, but close enough. A pretty dark movie for the time it was made. Psychological thriller with Bette Davis as Baby Jane, a terrifying and out of control washed-up former child star, who wants to reclaim her past glory days. She lives with her crippled sister Blanche (Joan Crawford), also an actress, her success in show biz was as an adult. There’s a rivalry going on between them and its sad to see two sisters who can’t get along. I gave up on the film a few years ago, because I hated the character of Jane, but decided to give it a second chance. Will never become a favorite of mine, but I appreciate it today more than I did on first viewing. Great performances and everything that happens could take place in real life, which makes it doubly disturbing. It has been said the film introduced the world to the hag horror or “psycho-biddy” subgenre of horror/thriller films featuring psychotic older women. Apparently the real-life hatred between Bette Davis and Joan Crawford spilled over into the production. If so, I’m happy I wasn’t on the set.
Rating 8/10 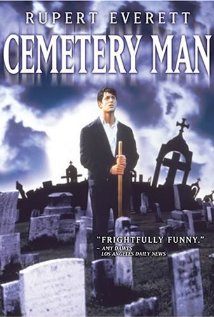 Cemetery Man (1994) (Michele Soavi)
His girlfriend has very kissable lips, but the romance was a bit too sudden if you ask me. I liked the atmosphere that was created, and it’s among the most quotable and genuinely funny horror films I saw this year. An unconventional screenplay, which may appeal to those who are burned out from watching conventional horror. The story isn’t always logical, but the comedy aspects appealed to my sense of humor, for example the guy who keeps eating his TV dinner with zombies and bullets flying everywhere.
Favorite quotes:
”Go away, I haven’t got time for the living!”
“We all do what we can not to think about life”
“Hell, at a certain point in life, you realize you know more dead people than living”
“Just because we’ve got the new ones (phone books) doesn’t mean to say we have to throw the old ones away. These books are classics!”
Rating 8/10

The Long Weekend (1978) (Colin Eggleston)
If you want a realistic drama/horror set by the Australian coast, this is it. The films centers on a married couple who go for a camping weekend. The wife says she is bored and they argue. He is trigger happy and fires his gun for fun. She reads and smokes cigarettes. In the wild, they have to deal with the elements, insects, possums, and so on. The film has a few jump scares and that was basically as scary as it got. Others have proclaimed it to be underrated and I admit the last 20-25 minutes are quite captivating and surprising. A shame it took so long to become thrilling. The film is lacking in story the first hour, an uneven movie with a strong ending.
Rating 6/10 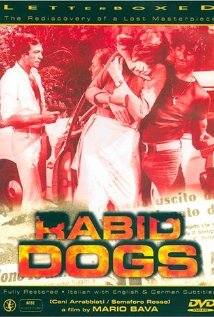 Rabid Dogs (aka Kidnapped) (1974) (Mario Bava)
I thought this was going to be a horror because of the director involved, but turned out to be an Italian grindhouse thriller. A riveting story so you can’t stop watching, and certainly very tense. One of the few films by the director which discards the supernatural to embrace gritty realism. Much of the running time, close-ups are used inside a getaway car. The confined location makes the viewers feel they are passengers. Has an interesting history in that the film wasn’t released until 1998 on VHS.
Favorite quote: “As long as you’re worried, I won’t be”

The Changeling (1980) (Peter Medak)
I was completely into the movie for the opening 35 minutes. However when the music box in the old house played the same tune the main character recently composed on his piano, the story lost believability with that unrealistic coincidence.  The teleportation of the ball was also ridiculous, both these scenes were unconvincing and took me out of the movie.
That said, the film has an amazing atmosphere, which slowly builds, and the unknown supernatural presence is creepy, especially when he is alone in the big house and goes up to the attic for the first time. George C. Scott seemed too old to have a young wife and small child, but he anchors the film with his fine lead performance. Most people would have gotten the hell out of there, but he stuck around and wanted to get to the bottom of the mystery. The second half of the movie with the Medium and murder investigation was not as scary once the supernatural entity was explained, but was entertaining enough and I wanted to see how it would play out.
Rating 7/10

What do you think about these films? As always, comments are welcome