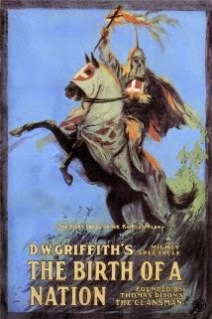 My contribution to Ryan McNeil’s 2014 blindspot series blogathon, where I watch a film each month that I have never seen before.

Directed by D.W. Griffith, Birth of a Nation is a key film of the silent era. The first big-budget blockbuster, the first epic.

Set before, during, and after the American Civil War 1861-1865. Was, and still is, highly controversial with its portrayal of African-American men (played by white actors in blackface) as unintelligent and sexually aggressive towards white women, and the portrayal of the Ku Klux Klan (whose original founding is dramatized) as a heroic force. There were widespread African-American protests against the racist elements. The NAACP spearheaded an unsuccessful campaign to ban the film. Griffith’s indignation at efforts to censor or ban the film motivated him to produce Intolerance the following year.

The Birth of a Nation was the longest and most profitable film then produced, and secured both the future of feature-length films and the reception of film as a serious medium.
Of significance for its groundbreaking filmmaking techniques, and has been quoted as “the birth of an art”. According to 1001 Movies You Must See Before You Die, director DW Griffith was more interested in the possibilities of the film medium, than the blatantly racist play by Thomas Dixon, which the film is based on.
Griffith utilized close-ups, panoramic long shots, panning camera shots, parallel storylines, cross cutting, night photography, color tinting for dramatic purposes, building up the plot to an exciting climax, dramatizing history alongside fiction, and a battle sequence with hundreds of extras made to look like thousands. In fact cross-cutting and close-up he had already experimented with in short films from 1909-1911.
Also features the first original music written specifically for a film. ”The Perfect Song” is regarded as the first marketed “theme song” from a film.
These innovative film techniques, while not all of his creation, make it one of the most influential films in the film industry. The impact was far greater in 1915, because these techniques are commonplace today. In fact so common, that I hardly noticed the groundbreaking camera work.

So what did I think? Lasting over three hours it tested my patience. Truth be told the story wasn’t of great interest to me. Mainly was a film I felt I ought to finally see due to its reputation. The recreation of the battle field scenes is quite impressive and looks like historical footage. However I would argue those scenes are overpraised and only makes sense with the title cards telling us what’s going on.
The assassination of President Lincoln by John Wilkes Booth at Ford’s Theatre is probably the most memorable scene, which I feel works without title cards. Even though the second half is very racist, as cohesive storytelling I feel it’s more straightforward and easier to follow than the first half.

Roger Ebert wrote in his insightful review, “all serious moviegoers must sooner or later arrive at a point where they see a film for what it is, and not simply for what they feel about it.” He also notes, “But it is possible to separate the content from the craft?” Ebert continues that “The Birth of a Nation is worth considering, if only for the inescapable fact that it did more than any other work of art to dramatize and encourage racist attitudes in America. (The contemporary works that made the most useful statements against racism were “Uncle Tom’s Cabin” and “Huckleberry Finn.”)
Unfortunately the film is also credited with the revival of the popularity of the Ku Klux Klan, which was all but extinct when the movie appeared.

Birth of a Nation is a film that is difficult to love due to its controversial subject matter, yet among the most influential in film history.

Thanks for reading. Have you seen  The Birth of a Nation or other D.W. Griffith films? Is it possible to admire the filmmaking despite the racism?