Stagecoach (1939)
John Wayne western directed by John Ford. The drunkard (Thomas Mitchell) is the character I remember most vividly. Not a personal favorite, but it does pretty much everything well. The stuntman who threw himself under the stagecoach was a brave man.
John Ford’s first collaboration (of over 20) with John Wayne, and his first Western shot using the gorgeous Monument Valley of the Southwest. The film is also widely considered to have single-handedly elevated the Western into respectability.
Rating 8.0

True Grit (2010)
Well-written, just annoying that difficult to hear what Jeff Bridges and Matt Damon are muttering with those heavy accents(subtitles are a good idea). What it does differently to other westerns is the feisty girl who befriends the Jeff Bridges character. In terms of memorable scenes, there’s the moment at the beginning when she negotiates, which is quite funny. Action scenes I feel are nothing remarkable. The cinematography of the film is pretty great, and the language also transports you back to the era. A worthy attempt by the Coen Brothers.
Favorite quote: “If those men wanted a decent burial, they should have gotten themselves killed in summer”
Rating 7.5 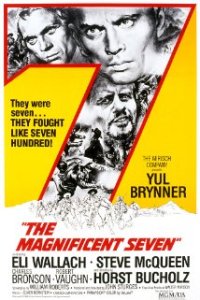 Magnificent Seven (1960)
Decent and maybe a bit overrated. A remake of Seven Samurai (1954). I wouldn’t go so far as to call Magnificent Seven a great western. The opening is memorable, but the only other scene I remember vividly is the knife throwing moment with James Coburn. Perhaps the reason it’s remembered is the ensemble cast, the title, and the truly iconic main theme.
Yul Brynner’s has top billing, yet his performance is bland and robotic(LOL he would later play a robot in 1973’s Westworld).
Toshirô Mifune did a superior acting job in Seven Samurai in the role of the 7th member of the group. Chico (Horst Buchholz), a young, would-be gunfighter, is ok, but just doesn’t have the same charisma as Mifune.
Favorite quote: “A dollar bill always looks to me as big as a bed spread”
Rating 6.8

The Big Country (1958)
A big epic, that lives up to its title, starring Gregory Peck and Charlton Heston. I liked it, a bit overlong, but has plenty of twists and turns. The ending is somewhat ambiguous. The main theme gives me chills, definitely among the best ever in a western, which fits with an epic movie. The music was nominated for an Oscar, and should be played loud.
Rating 8.0

Companeros (1970)
A lot better than I expected. From Sergio Corbucci, the director of Django (1966). He’s a very visual director, and so is his film Companeros: Melons on heads, the banana peel and silver dollar scene, buried in the ground except his head, taking photograph which turns into a shooting, the villain with a falcon on his arm. You could watch it without audio and still follow the story.
Rating 8.0

Keoma (1976)
Also known as Django’s Great Return or The Violent Breed. Considered the last great spaghetti western, directed by Enzo G. Castellari (who also helmed 1978’s The Inglorious Bastards)
The haunting soundtrack impressed me. The film does a good job of capturing the landscapes and dusty Old West, unfortunately the pacing is poor.
It picks up the last half hour, the scene of riding two horses at once was a stand-out, so too was the moment when he says he’ll spend four cents on the merchandise because that’s the price of four bullets, counting, and revealing a man behind each finger. The ending scene with the screaming woman is also effective. There’s a Christ allegory within the story. Also, watch out for the Donald Sutherland look-a-like.
Interesting to see slow-motion action scenes, before John Woo invented “gun fu” in the 80s. I guess Sam Peckinpah was at it too in 60s and 70s.
Favorite quote: “We all exist so man can fulfill his destiny, why do you want to change mine?
Rating 7.0 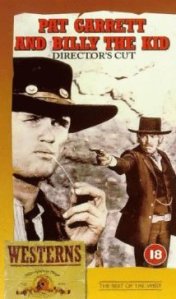 Pat Garrett & Billy the Kid (1973)
The parts may be better than the whole. The best thing this Sam Peckinpah western has going for is the soundtrack. The opening credits are quite inventive. The opening shoot-out by the house was the best action scene. There’s a blurring of hero and villain, with Kris Kristoffersen as Billy The Kid(the outlaw), and James Coburn as Pat Garrettl(the law).
Features several Bob Dylan tracks that play during the movie, most notable is Knocking on Heavens Door, which was actually written for the movie. (On a side note, isn’t that what director Baz Luhrmann has been doing the last few years, using modern music in a historical context)
Dylan himself has a supporting role, his performance I felt was a bit of a distraction from the main story, like they were cashing in on his popularity at the time by having him in a few scenes. In fact his presence almost overshadows the uneven story. Feels like Dylan is playing himself to some degree, by giving philosophical answers to simple questions, such as, who are you? and what’s your name?
Favorite quotes: “I could live anywhere, I could leave anywhere too”
“Mexico might not be bad for a couple of months.” “Depends on who you are”
Rating 6.8 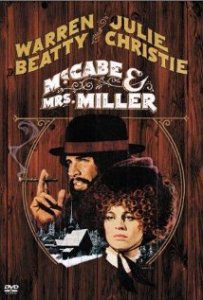 McCabe and Mrs Miller (1971)
Robert Altman western. The decision to use Leonard Cohen music from the 1960s, in a western set in the past, apparently was hip in the early 1970s, with Pat Garrett & Billy the Kid (1973) also going in that direction, with a Bob Dylan soundtrack.
A brave move to use natural lighting for many scenes, so it does come across as quite dark. It achieves an authenticity in costumes and production design. I found the actual story quite underwhelming and dull, which goes for atmosphere rather than an intricate plot. So if you want action and adventure, I’d skip this western.
Roger Ebert wrote:
“Few films have such an overwhelming sense of location. Presbyterian Church is a town thrown together out of raw lumber, hewn from the forests that threaten to reclaim it. The earth is either mud or frozen ice. The days are short and there is little light inside, just enough from a gas lamp to make a gold tooth sparkle, or a teardrop glisten. This is not the kind of movie where the characters are introduced. They are all already here. They have been here for a long time. They know all about one another.”
Rating 7.3

Little Big Man (1970)
Directed by Arthur Penn, starring Dustin Hoffmann and Faye Dunaway. A coming-of-age saga which is quite novelistic in the storytelling approach.
The best thing it achieves is giving a voice to the Indians, a more human and nuanced depiction of them, than other westerns I’ve seen.
The tone of the story is larger than life, in a Forrest Gump kind of way. Different to most westerns, but as a whole an entertaining film. You could watch it as a comedy, definitely not for everyone. I had difficulty rating the film, I liked it, didn’t love it.
Rating 7.3 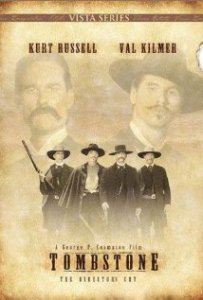 Tombstone (1993)
Good for pacing, yet a bit heavy-handed. Basically good guys vs bad guys, very mainstream, with a star-studded cast.
I wouldn’t call it the definitive depiction of the Wyatt Earp story on screen, but I think it was more entertaining than the uneven My Darling Clementine (1946).
Val Kilmer is the stand-out as Doc Holliday, although the friendship between him and Wyatt Earp is not really elaborated on(except a scene at the very end)
Johnny Ringo showing off with his gun followed by Holliday doing the same with his cup was a funny scene.
Favorite quote: “You look up and you think God made all of that, and he still remembered to make a little speck like me”
Rating 7.0

Red River (1948)
Directed by Howard Hawks. Often cited as the best western of the 40s. Ranked #5 on AFI’s list of Top 10 westerns. Stars John Wayne.
I didn’t like the corny music, which is a bit dated and unintentionally amusing. The best thing about it is fast-talking funny man Walter Brennan(who would later play a similar character in Howard Hawks’ Rio Bravo)
All those animals storming ahead is a scary sight. Moving cattle over vast distances is similar to the story in mini-series Lonesome Dove (1989).
I was surprised how trigger-happy and erratic John Wayne’s character is, it didn’t take much for him to kill.
Favorite quote: “Now wait man, you aren’t going to take a man’s only set of teeth, are you? What are you going to do with them?” Indian: “My name now Two Jaw Crow”
Rating 7.2

Shane (1953)
Directed by George Stevens. An influential, if somewhat average and dated western by todays standards. Was nominated for 6 Academy Awards, and won an Oscar for cinematography, really is a beautiful mountainous backdrop.
The theme of prejudice towards a new guy in town is still relevant today.
The bar brawl is probably the standout scene. Not sure why reviewers are raving about Jack Palance’s performance, he’s good, but he barely has any scenes at all.
As Dan at Public Transportation Snob mentioned in his review, the ending with the boy running is also a scene that you remember.
Favorite quote: “Where are you bound?” “One place or another. Some place I’ve never been”
Rating 6.5

The Gunfighter (1950)
Gregory Peck stars in this overlooked western, as the fastest gunslinger in the West, Jimmy Ringo. About how his reputation makes him an easy target for trouble. He gets a lot of unwanted attention from the townspeople.
Rating 7.8

Ranking of Western marathon (my scores in brackets)

So that about rounds up this marathon I’ve been on! I bid farewell to the Old West. It was fun to explore a bunch of classics of the genre, and understandably feeling like I need a break from westerns right now.

Have you watched any of these? Agree or disagree with my verdicts above? Which are the best films you’ve seen this month?