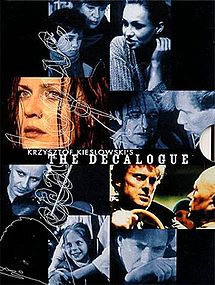 Spoilers occur about the ending, this review is intended for those who have already watched the film. 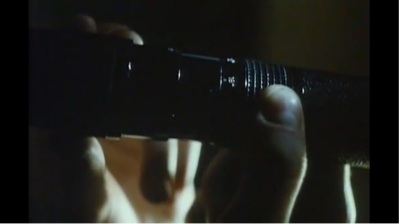 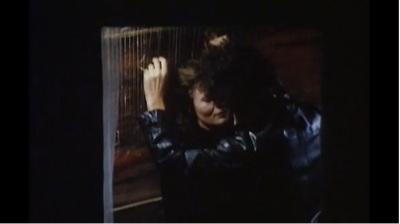 Summary:
19-year-old Tomek has for some time secretly spied on his beautiful 30something neighbor Magda in the opposite building using a telescope, especially when she has male company, which is not a rare occurrence. He knows it’s wrong. However, for Tomek, observing her has become an obsession, and he even allows himself to interfere with her life, phone calls, delivering milk, and withholding mail (he is employed at the local post office). His new gimmick, to send her messages in the post, leads him to confess it was him all along spying on her. As the initial irritation wears off, she invites him to visit. She wants to demonstrate to him, that love is nothing more than a physical act. He hurries home to commit suicide. Magda becomes obsessed, possibly not with Tomek, but with his welfare and her guilt. She regrets her conduct, more than that, she discovers a lost feeling. A feeling which in her opinion doesn’t exist. 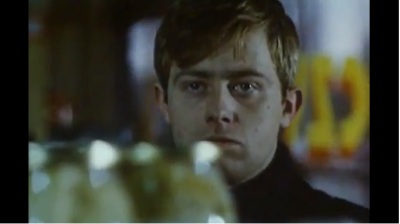 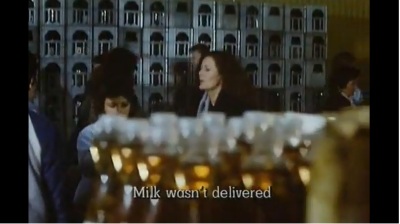 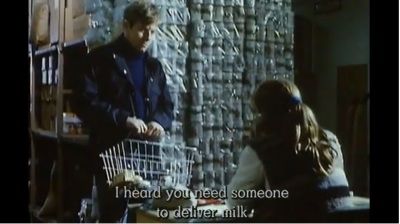 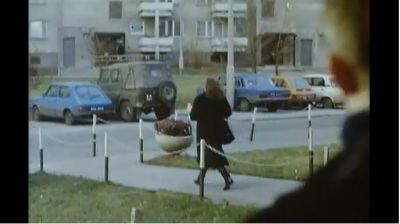 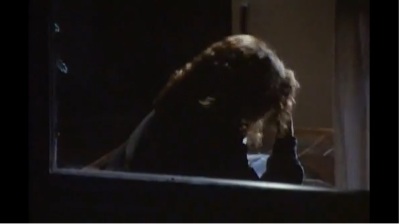 Analysis and interpretation:
Magda has a cynical view of love, the physical act of love dominates her life, she doesn’t allow herself to become emotionally involved, and claims not to believe in emotional love.

In this case, love evolves from sexual perversion. Lust and voyeurism are connected. Tomek realizes he is observing areas of a personality, which rarely are seen by others, because the person thinks they are alone. He thought she was strong and insensitive, but he observes her crying (screenshot above), he sees a glimmer of her true self, and this is likely why he starts to fall for her. A theme of the story is also loneliness. There are many windows between people. Everyone suffers in their corners. Episode 6 is a cat-and-mouse game of voyeur and victim, with an exchange of roles between the two about 2/3 of the way through. 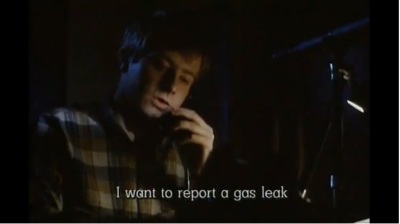 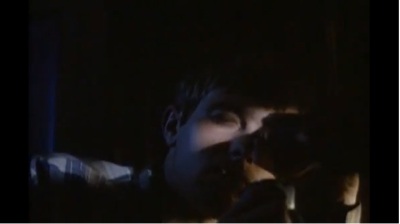 Tomek is a voyeur, an onlooker, he seeks sexual gratification by watching a woman having sex in the opposite building. Through his telescope he makes the sexual activities a threesome, and some viewers might even call it a foursome, as we are watching the watcher. He feels pity for Magda, when she cries following a fight, in her loveless frame of mind, he can put himself in her place. But you couldn’t claim what he is feeling inside is a healthy love, he has not yet had the chance to get to know Magda, her attributes and needs. Tomek naively puts her on a pedestal without knowing who she in fact is on the inside.

As Deciphering The Decalogue writes: “Tomek and Magda really need to reflect on what it really means to love someone, because both of their views, whether it be spying on someone or just engaging in sexual relations, were blinding them to see what love really is.” 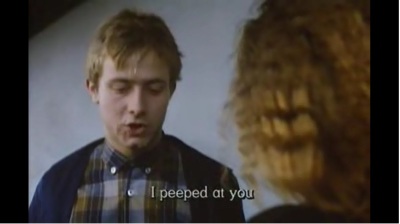 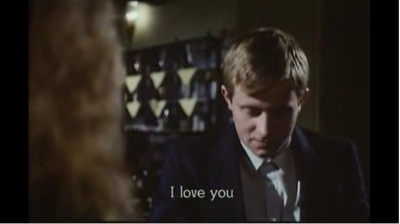 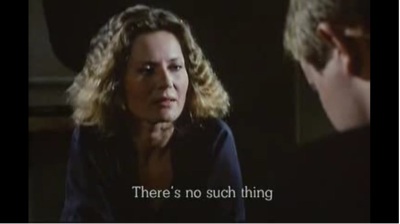 We know very little about Magda’s childhood, but her actions suggests someone who has led a loveless upbringing. Her behavior implies she doesn’t really know what love is, and doesn’t understand the difference between emotional and physical love. Or perhaps she was hurt so deeply that she never wants to experience that emotional pain again. She doesn’t express that she loves herself, let alone other people. Her sexual life is an ever-changing mess, and maybe that’s the way she wants it, but the price to pay is no meaningful, emotional relationships to others. Despite all the sex, she is a tragic woman, which the crying Tomak is witness to. Magda seeks to fill the empty emotional void by having various men admire her for her sexual favors. This is why she has no problems with being observed by Tomek, she can’t get enough acceptance and confirmation from men, a deficit she can never satisfy. 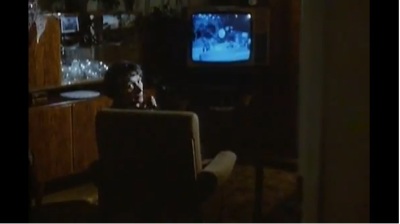 As with other characters during The Decalogue, Tomek does not have a father figure, and his mother is not there, the most important role models in his life are absent. He grew up in an orphanage, and lives with his friend’s lonely mother. Tomek tells Magda during a conversation, that he prefers to repress thoughts of his mother, probably because it hurts so much to remember her betrayal.

As reviewer at damaris notes: “It is one thing to recreate a kind of fantasy world not unlike the fairy tales about love we heard as a child, but once we enter into a relationship, we soon realize that creating intimacy with another human being is often difficult and messy, and requires a lot of effort and care.” (…) “Both Tomek and Magda are in some ways contemptible, some ways pitiable, and some ways admirable. As in Decalogue V, Kieslowski loves to create complex characters about whom we feel conflicted. Tomek is initially presented as a creepy, voyeuristic teenager who has nothing better to do with his time than to spy on the intimate life of his female neighbor. As the film goes on, however, we see that Tomek is actually a very sensitive and caring individual who holds a very admirable (if naive) view of love and relationship. Likewise, Magda is initially presented as a promiscuous, cynical and lonely woman, but we later see an affectionate, almost maternal side and someone whose heart has been awakened to new possibilities in relationships. Characters like these demonstrate Kieslowski’s commitment to present characters that are fully human; not one-dimensional but reflecting the ever-present complex interaction and tension between human dignity and depravity. “ 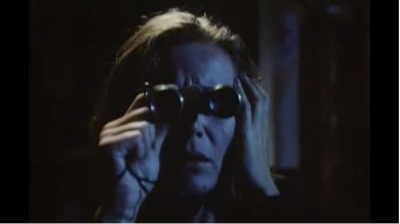 Kieslowski on the longer version, A Short Film About Love (1988): “The interesting thing about it is the perspective. We always look at the world seen with the eyes of a person who loves. Not with the eyes of someone, who is being loved. To start with we see it from the boy’s perspective, Tomek, who is in love with the woman, Magda, but we know nothing about her. We only see her, as he sees her. A moment happens where we see them together; then the perspective changes completely. When Magda starts to have feelings for him, first pity, later a matter of conscience, and later on also a sort of affection, we start to see the world through her eyes. And we don’t see him anymore. He disappears, he slits his wrists and is transported to the hospital. We are never at the hospital with him. Everything is now seen from her point of view. The change of perspective 2/3 into the film is an interesting structural intervention. We share the point of view with the character, who loves, not with the loved one. The loved one has gone to pieces and become an object. Love is so difficult, for the young man, but later also for the woman. (…) and this love is always connected to some form of suffering, a kind of impossibility. Tomek spies on Magda. Then Magda attempts to locate Tomek. Due to guilt, but probably also because she is reminded , that she also at an earlier time behaved much like him. When she was his age, or maybe younger, her behavior was similar to him. Pure of heart and convinced of the existence of love. But then she got burned. She has touched something red-hot, which hurt terribly, and decided to never love again, because she realized, that the stakes were too high. But then this situation occurred.”

Verdict:
Episode 6 is very well edited, a lot happens in the hour it lasts. Connected to the sixth imperative of the Ten Commandments: “Thou shalt not commit adultery.” you could argue that the longer theatrical edit, entitled A Short Film About Love (1988) was a more fitting title. The Commandment confuses more than anything for Episode 6. Magda is violating the commandment, though she is unmarried. The 6th commandment is not only about adultery, but also improper conduct.
I have to admit age difference in a relationship depicted on screen I have grown a little weary of, but this is one of the most powerful dealing with that issue I can remember. The main theme is voyeurism, observing and secretly spying on other people’s lives. But Kieslowski has also been looking at us (in all ten) and showing us ourselves. Another theme is emotional love and physical love, and how it can be difficult to figure out, when the person you desire may not have compatible ideas about love.
Episode 6 deals expertly with the matter of naïve, vulnerable feelings of youth, and cynical, world-weary experience. So much of the story is told without dialogue, and is about longing and unspoken desire, rather than words. Tomek is basically violating Magda’s privacy, we know it’s wrong of him, but we somehow become fascinated by Magda’s life in the same way Tomek does. There is a certain thrill in the forbidden. However, you could question the realism in 19-year-old Tomek’s actions.
Tomek and Magda have now seen what is possible within a relationship, and though it may not happen between themselves, there is hope that they will offer genuine love and intimacy to someone in the future. Sex does not equal love, but love can include sex as one of its expressions.
I never figured out what the spilt milk symbolizes, anyone? Happens when she is crying in screenshot 7, and again outside Magda’s door, when Tomek visits her.

Next time, I’ll look at Episode 7. Readers of this review, any thoughts on Episode 6?