In a very honest and personal frame-by-frame interview with Cousins (on youtube), Lynch talks about the beginning of Blue Velvet, how it’s a slow dreamy feeling, where things can go either way.

A disturbing vision of small town life in America. Kyle Maclachlin plays a voyeuristic amateur detective named Jeffrey, and he is sort of director David Lynch’s alter ego, with that trademark buttoned-up look. Lynch stated in the interview above, that he doesn’t like wind on his collarbone.

Lynch is a very visual storyteller. Those blue curtains in the opening credits sure are strange and dreamlike, they don’t look like regular cloth. They represent what the film is about, something hidden. A theatre curtain that will soon reveal the story. Another indication of delving beneath the surface is the iceberg model at the police station, which probably symbolizes that certain things are out of sight to the people of Lumberton, most of the iceberg is below the surface.

In the first few minutes, the man waving from the fire truck is interesting, is he waving to the audience, and why? Perhaps to make us aware that we the audience are also voyeurs like Jeffrey is.
I love the metaphor of the insects down in the grass, an insect battle that encapsles everything dark under the surface of the perfect green lawn and white picket fence. Things are not what they seem.

Jeffrey’s role models at home and his childhood world is kind of falling apart, the story is a coming of age tale about Jeffrey discovering the real world outside the safe environment of his family. He goes on a journey to the dark side of Lumberton and himself. 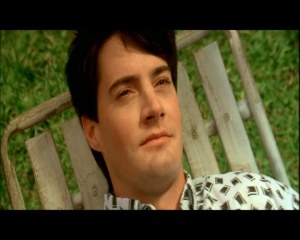 Blue Velvet can be perceived as an examination of how sex can lead to domestic trauma, fear, power and on occasion euphoria. Lynch’s first film Eraserhead is comparable, a film seen by some as founded on sexual anxiety.

Cinematographer Frederick Elmes claim in the dvd extas, that Lynch has found that spot in our subconscious where there is a little bit of a voyeur. What could be seen that shouldn’t be seen. He thinks it’s a film about what people think about, not what they talk about or do.

Blue Velvet, and other Lynch films have been accused of glorifying violence. According to Lynch in the interview book Lynch on Lynch, the wild, unpredictable Frank Booth is similar to Killer Bob in Twin Peaks, in that he seems to represent masculinity at the extreme – twisted, violent and psychotic. Some people were upset with Dorothy’s masochism and Frank’s extreme sadism, a sort of sado-masochistic relationship, where you are confused if Dorothy is willing or unwilling. In the interview book, Lynch points out it isn’t right to assume that a character like Dorothy is every woman. Movies tend to stereotype, suddenly if he is a black man, he represent all blacks. The actress playing Dorothy, Isabella Rossellini, interpreted her character as someone masking herself because she is afraid of what she looks like. She’s shy and she hates herself. The wigs and make-up was because she wanted to look like a doll – perfect – to hide her madness. The more she becomes a victim not to elicit sexuality, the more she does. I played her that way: Everything she did turned out to be something she didn’t mean! Certainly plausible that a part of Dorothy enjoys being kidnapped, an escape or a change from her daily life? A few critics point out that Dorothy’s apartment could represent a mother’s womb, the walls are pink and red colours, she is a mother who has lost her son. The building she lives in is called Deep river. Several critics have talked of the themes of family. Jeffrey finds a perverse substitute for parents in Dorothy and Frank.

Lynch had final cut, which he would have for all his subsequent films as well. What I like about his films is how he is artistically uncompromising, he doesn’t go for box office records, but makes a film he wants to make.

In spite of the disturbing elements, it’s the visuals and funny dialogue that stay with me, I think my favourite quote is uttered by Dennis Hopper: “We’re taking our neighbour for a joy ride!”

A bit of trivia. Contains several references to the assassination of Abraham Lincoln. Jeffery is warned not to go to Lincoln Street. Frank Booth’s name evokes John Wilkes Booth, Lincoln’s assassin. A reference to Lincoln also appeared in Mulholland Dr.( The blue-haired lady sits in the same position as Lincoln did in the Ford Theater)

Spoilers ahead. Some film critics claim the ending is a parody, things are not really resolved. There is still much twisted sexuality and violence in Lumberton. The bug in the beak of the bird near the end is a clear signifier that there will always be darkness to balance the light.

One of those films where you are not sure how to react. Will definitely divide audiences, Roger Ebert hated Blue Velvet, and thought the issues should have been taken more seriously without the comedy.

Doesn’t seem to be much point rating, as my reviews are always recommendations. Anyhow, here goes: 8/10

Readers, any thoughts on Blue Velvet?