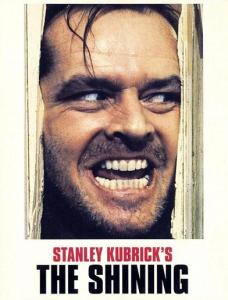 I took a while researching for this review, as it’s one of my favourite Kubrick films. As most movie lovers I think have already watched The Shining, there are some spoilers! So you’ve been warned.

A horror film about the dangers of isolation, a writer named Jack, his wife Wendy, and young son Danny accept a job as off-season caretakers at a remote hotel.

What was the idea behind the opening title sequence? According to Kubrick, the sequence was an attempt “to establish an ominous mood during Jack’s first drive up to the hotel – the vast isolation and eerie splendor of high mountains, and the narrow, winding roads which would become impassable after heavy snow” 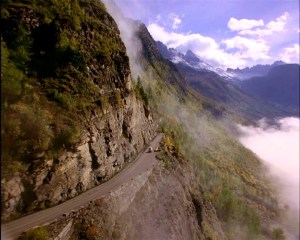 Adapted by director Stanley Kubrick and Diane Johnson from Stephen King’s 1977 bestseller. Kubrick thought the story was interesting by the balance of the psychological and the supernatural. Some have argued its one of the more mainstream films of Kubricks career.

The acting is amazing to me. Jack Nicholson has such an expressive face and you can’t take your eyes off him. Nicholson is almost naturally kind of creepy. Shelly Duvall went through a difficult shoot, she had to as his wife constantly be in a state of panic and tears for large parts of the film, and it took its toll on her. Maybe the acting is a little over the top sometimes, I’m not sure if it was intentional that Nicholson’s scenes sometimes are funny. Because of this, the film was never really that scary for me. The humour is part of Jack’s madness, creating a sense of black comic creepiness as he merrily goes about his homicidal work, loudly announcing, “Wendy — I’m home!” as he attacks a door with an ax, or chortling lines from the fairy tale “The Three Little Pigs” (”Little pigs, little pigs, let me in… Not by the hair of your chinny-chin-chin!”)

The film relies on a sense of claustrophobia and growing paranoia to generate a sense of unease. A narrative structure that I hadn’t noticed, but read about in “The Complete Kubrick” is how the gradual reduction, from months, to days, to hours, and from the mountains, to the hotel, to the maze, serves to increase the tension and dramatic pace of the film.

The hedge maze becomes a metaphor for the predicament in which the characters find themselves trapped. In fact, the hedge emphasizes that the entire Overlook Hotel is really a maze, with endless corridors and right angles, around which unknown horrors may be lurking.

Kubrick quite possibly deliberately directs the audience towards a psychological explanation, are we inside Jack’s mind, or are we at the overlook hotel? When Jack is released from the freezer, we begin to wonder if the hotel really is haunted. Has that dream like quality, so you’re never sure what’s real and what’s going on in Jack’s mind. The only time Jack interacts with a ghost when he is in a room without mirrors is after Wendy has locked him in the storage room — and in that case, he only hears Grady’s voice through the door, almost as if it were only an imagined voice in his head.

Many remember the film for the memorable door scene with the axe, which has become a classic moment from cinema history. The line “Here’s Johnny!” was an imitation of announcer Ed McMahon’s famous introduction of Johnny Carson on U.S. network NBC-TV’s “The Tonight Show Starring Johnny Carson”.

Writer Stephen King was dissatisfied with the casting of Nicholson, though a fine actor, he felt he was wrong for the part, as the audience automatically identified him as a loony from the start, as his last film was One flew over the cuckoos nest. If the guy is nuts to begin with, then the downfall doesn’t work. Apparently, Stephen King was unhappy with the film, and in 1997 he co-operated in the making of a tv-miniseries, which followed his original book more closely. According to Stephen King, the title is inspired by “Instant Karma” by John Lennon, which features: “We all shine on.”

Film critics also found flaws, saying likewise Nicholson was out of control before the film started, while his victim wife and distant son remained the same. The elevator scenes for one critic failed, because they felt like flashing slides inserted into the film. Another critic commented on how the various apparitions never really form a pattern, so the film finally seems not to make sense. Clearly a reviewer who doesn’t like ambiguity. 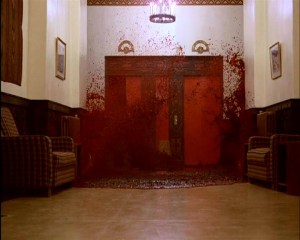 Despite receiving generally unfavourable reviews upon its initial release, the film is today regarded as one of the best horror movies ever made. Many of Kubrick’s films tend to be appreciated more in time.

Kubrick as quoted from 1984, in the book “The Complete Kubrick”: “A story of the supernatural cannot be taken apart and analyzed too closely. The ultimate test of its rationale is whether it is good enough to raise the hairs on the back of your neck. If you submit it to a completely logical and detailed analysis, it will eventually appear absurd. In his essay on the uncanny, das Unheimliche, Freud said that the uncanny is the only feeling, which is more powerfully experienced in art than in life”

In the book “The Cinema of Kubrick”, the director talks about that “one of the things that horror stories can do is to show archetypes of the unconscious: we can see the dark side without having to confront it directly”

In the few interviews he gave about the film, Kubrick said that he thought horror films were intrinsically optimistic because the supernatural trappings implied that our souls survived death.

According to “The Complete Kubrick”, The Shining is one of the first, and few horror films to successfully create a genuine chill despite the fact that all but the climax is shot in daylight. Although there is a lot of blood, for instance in the elevator sequences, the body count is surprisingly low. I love the visual style throughout: 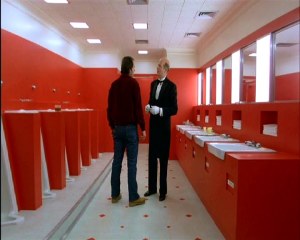 Roger Ebert thinks it’s a question of who is the reliable observer, who can we trust? Jack claims in one of the opening scenes his wife Wendy is “a confirmed ghost story and horror film addict.” Is Jack making this up, and does drinking at the hotel send him over the edge? Danny’s perception of events is also unreliable, his ability to shine makes him see the past and the future, so it’s possible he can’t distinguish what is happening and what is not. Or does the boy just have a lively imagination like so many children do? In my opinion Wendy must be the most reliable of the three, even though Ebert claims her view may be coloured by Jack’s previous behaviour. Jack’s madness is shown from his family’s point of view, as unexplainable and abrupt outbursts, as mood swings and sudden fits of rage without any clear cause. According to IMDB, Wendy is perhaps in possession of the shining ability. The argument could be made that she has a degree of the ability ascribed to Jack and Danny insofar as she does begin to see the hotel’s ghosts near the end of the film. In the book, Danny asks “Do my parents “Shine?” and Halloran replies “Your mother sparks the tiniest bit, and your dad… I don’t think he has any. 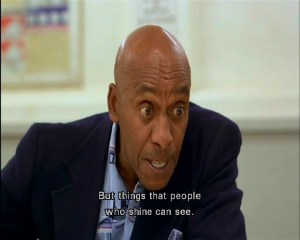 Some trivia from IMDB:

Fearing that nobody would want to stay in room 217 ever again at Timberline Lodge, Oregon, where the exterior was shot, Kubrick changed the script to use the nonexistent room number 237.

I’ve heard mirrors are important in the film. Why is this? Whenever Jack sees a ghost, a mirror is always present, e.g., when he meets Lloyd there is a mirror behind the bartender, when he speaks with Grady there is a long mirror beside them, and when he encounters the woman in room 237 there is a full length mirror in front of him. The only ghost scene that doesn’t have a mirror is the one where he can’t see the ghost either (when Grady speaks to him from outside the pantry). Some viewers have argued that this indicates that the ghosts are not real at all and that Jack is essentially talking to himself by projecting another figure into the mirror. However, there are no mirrors present when Danny sees the Grady twins or when Wendy begins to encounter ghosts towards the end of the film. As director Kubrick intended that the ghosts in the film be seen as real, the presence of mirrors in the scenes of Jack’s encounters, while it may offer food for viewer discussion, does not provide a strong argument for the stance of the ghosts being not real.

Is there any significance in the references to Native Americans? References to Native Americans and their culture are dotted throughout the film. For example, Stuart Ullman points out that the hotel is built on the site of an ancient Indian burial ground; Indian motifs and designs decorate the walls of the interior of the hotel; Calumet baking powder cans feature prominently in two pivotal scenes (as Hallorann first shines, asking Danny if he wants some ice-cream, and as Jack asks Grady to let him out of the locked pantry); July 4th is given great significance at the end of the film. These references to Native American culture and history are unique to the film, they are not found in the book, and this has prompted many fans over the years to query their importance.

The Shining is not really about the murders at the Overlook Hotel. It is about the murder of a race — the race of Native Americans — and the consequences of that murder […] it is also explicitly about America’s general inability to admit to the gravity of the genocide of the Indians — or, more exactly, its ability to “overlook” that genocide.”
The Overlook Hotel is America. America, like the Overlook, is built on an Indian graveyard. The blood of the buried Indians seeping up through the elevator shafts is silent. So are the Indian tapestries that Danny rides over on his bigwheel. The Shining is Kubrick’s observation that America is built on hypocrisy, on a failure — a refusal — to acknowledge the violence from which it is born. That violence remains silent today because we refuse to look in the mirror – where all the ugly truths appear: Redrum spelled correctly; Jack’s old crone, etc. […] July 4 marks the commemoration of the ugliness on which this country is built: it is the demarcation of the annihilation of the aboriginal people, and the formal establishment of the new society. Americans “overlook” the bloodshed upon which our society is founded: the British (Grady) heritage of violent colonialism, carried forward by American (Jack) colonizers.

What’s the significance of the photograph at the end of the film? Probably the single most frequently asked question in relation to this film is what does the final shot mean; how and why is Jack in a photograph from 1921? In a film with so much irreconcilable ambiguity, this one shot has generated more puzzlement than the entire rest of the movie, yet it is one part of the film on which Stanley Kubrick has been extremely clear about his intentions. As he told Michel Ciment, “The ballroom photograph at the end suggests the reincarnation of Jack”. But what exactly does that mean? Perhaps the simplest explanation for this is that Jack is the reincarnation of a prior hotel guest; the person in the photo is not Jack, but a guest who was present in 1921. Jack is the reincarnation of this guest.

My favorite quote from the film: 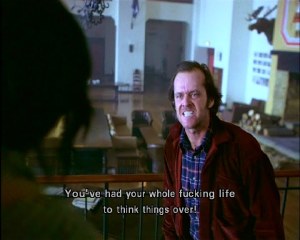 A modern classic in the horror genre. The Shining is in 1001 Movies You Must See Before You Die, and is currently ranked no 48 on IMDB’s top 250.

Readers, any thoughts on The Shining?